Refugees in Bavaria –
A town is split

A Europe without borders is just a memory as the influx of migrants polarises locals. 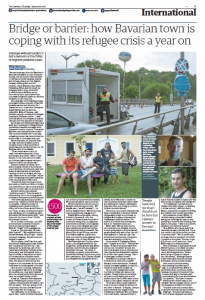 Two centuries ago, after the Napoleonic wars had laid waste to large parts of central Europe, the continent’s rulers decided to redraw the border between Austria and Germany along the Saalach river, right between Salzburg and one of its suburbs, now a Bavarian town called Freilassing. When Austria joined the Schengen area in 1995, the border in effect became obsolete: only a short white line in the middle of the motorway bridge still marks the division between the two countries.

But a year ago this month, the Freilassing bridge once again become a symbol of the barriers between nations and cultures. At lunchtime on Saturday 5 September 2015 – a day after Germany’s Angela Merkel and the then Austrian chancellor, Werner Faymann, had decided to accept thousands of refugees stranded at Budapest central station – it was here that about 400 refugees on board a train got their first glimpse of Germany.#

And it was on Freilassing bridge that a week later thousands of refugees found themselves stranded once again after Germany’s interior minister, Thomas de Maizière, reintroduced border checks that continue sporadically to this day, leading to tumultuous scenes that have left the border town divided in more ways than one.

Rainer Borchers, 38, remembers returning from his night shift as a hospital nurse in the early hours to find hundreds of people camped outside his home on the Bavarian bank of the Saalach.

“These people were in a lot of need: they were exhausted, thirsty and hungry. As a nurse, I want to help people, so I let them use my car park, my toilet and gave pregnant women a chance to rest in my camper van.”

Borchers continued to help for a week, after which he grew critical of the situation on his doorstep. He claimed he was spat at and threatened with a knife when handing out bottles of water, and one night heard shots on the bridge – police insist the banging sound was created by a van running over a traffic cone.

“Generators were running 24 hours a day and made my bedroom vibrate. I bought this house with my own money, and as a carer it’s not like I earn €5,000 a month.”

Borchers said he remembered “positive moments” from his week of volunteering, but in the coming weeks he became more and more disillusioned.

“I’ve never had anything to do with politics, but I called the Social Democrats to complain, I called the mayor of Freilassing, and I called the district office, but none of them would listen to me.” Then, he said, he called a nearby branch of Germany’s new rightwing anti-immigration party Alternative für Deutschland (AfD), “and they took the time to listen”. He has since joined the party.

On 24 October, the AfD held a demonstration with more than 1,000 protesters and several hundred counter-demonstrators against Merkel’s “illegal” management of the crisis.

A year on, Borchers said, his town feels “scarred”. “My neighbourhood is divided between left and right – there’s nothing in between. You are either pro-refugee or against.”

Others in the town disagree. Mayor Josef Flatscher said descriptions of Freilassing as a town divided were “completely over the top”. Last September the politician, a member of the conservative Bavarian Christian Social Union party, was driving back from a family holiday in Italy when he heard the news of the resumption of border checks between Austria and Germany on the radio. But when he drove across the bridge into his hometown an hour later, there were no border guards to be seen.

The next morning, local police set up makeshift patrols in the middle of the bridge. By the afternoon, they were replaced with members of the national police force, who still carry out sporadic border checks.

Twelve months on, Flatscher said: “I feel reassured about the situation in Freilassing, but of course we are keeping an eye on the broader macroclimate,” pointing to news of 6,500 migrants being rescued off the Libyan coast in a single day this week. “This isn’t going to stop completely. But next time we’ll know how to deal with the situation.”

The experience of the renewed traffic jams at the bridge, the mayor said, “made us realise how great it is to live in a Europe without borders. We should talk about that more often.” While he would not put his name to Angela Merkel’s credo throughout the crisis – Wir schaffen das, or “we will manage” – he didn’t disagree with her either. “We are a strong country, and we can manage a lot.”

Khaled Misho might agree. Having arrived in Germany in November 2014, the 21-year-old Syrian shares a room with three other young men, on the ground floor of a spacious three-storey house with a little garden and several large trees in the front, home to 60 refugees who have been located here while their asylum applications are being processed. The ground floor is reserved for men, one side for Arabic speakers, mainly from Syria, the other side for refugees who speak other languages, most of them from African countries.

Last September and October, when about 1,500 refugees arrived on the bridge from Salzburg every day, Misho had already been in Germany for almost a year and spoke basic German. “So I went to the bridge to support volunteers who distributed food and clothes and to help with translations. Both German officials and refugees seemed grateful when I helped, but a few times it turned out that the presumed Syrians didn’t speak any Arabic at all. I have no idea where they were from, but certainly not from Syria as they had claimed.”

Since then, the number of arrivals has dropped considerably. According to Germany’s federal refugee agency, no more than 40 refugees and migrants a day arrive at Freilassing’s reception centre. The shelter, in a former furniture factory, was working at an “operative minimum”.

“We are lucky here in our house with the refugees, as there is some green space in front and we all get along well with each other. I am still really grateful to Germany that I can be here and there are a lot of people in town who are happy to help us.”

Some people in Freilassing, Misho said, “maybe one in five”, seemed less happy about their presence. “A few times people have even told me that I shouldn’t be here. But then I always just answer them in German and then they are intimidated and confused by the fact that I speak German. That is my best way to defend myself.”

At the start of September, Misho is starting a new job in a restaurant at Chiemsee, a nearby lake and tourist destination. He would mainly be preparing salads, he said, but hoped he could work his way up.

Yet not every refugee who made it across the Freilassing bridge has reason to be hopeful. Alhough police on the bridge currently only carry out sporadic spot checks, border control has in effect been moved inland to the reception centres where refugees and migrants first arrive.

Those who cannot show a passport or show an intention to apply for political asylum are sent back across the border to Austria – in August, German police returned 300 migrants from Freilassing to Salzburg. With the Balkan route now closed, many of them are either forced to stay in Austria against their will or have to try to make their way back across the Saalach river at another crossing.

“In Freilassing it may feel like the refugee crisis has stopped – in Salzburg it is now starting,” said Karl-Heinz Müller, a 77-year-old pensioner based in nearby Fridolfing, who played a key role during the tumultuous weeks of September last year.

As the weather turned at the end of the month, Müller recalled seeing mothers with their babies waiting on the bridge for days on end, unwilling to move for fear of losing their place in the queue. “I was so immensely sad about our collective inertia.”

On 18 September Müller, who used to run an analytical science company that specialised in inventing new techniques to separate chemicals, decided that “since you couldn’t rely on the police, you had to use your brain”. With a marker pen, he drew a fat A on the wrists of the first 10 people in the queue, then set up a dividing line on the ground. The next 10 got a B, the next 10 a C, and so on. Soon, Müller was on to decimal places.

After a few days, one of the local papers likened Müller’s system to the Nazis marking up Jewish prisoners in a concentration camp, which made the pensioner very cross. “All we were trying to do was to create a just, fair system,” he said. The deputy mayor of Salzburg eventually donated boxes full of colourful wristbands normally used at political rallies, which Müller used instead.

After months of volunteering, during which he often slept for little more than two to three hours a night in a makeshift bed in one of the camps, Müller is ambivalent about the future, drawn between sympathy for anyone trying to make their way into Germany and understanding for those who are worried about the long-term effects of immigration. “You have to respect everyone who doesn’t want more refugees. We can manage this, but only if the population at large is involved in the process.”

With his vast archive of documents, wristbands and children’s drawings, he plans to set up a museum in his home. “Someone has to keep the story of what happened here last year alive.”