A new atheist church is the opium of north London 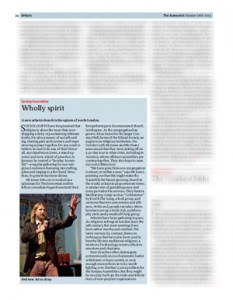 SOCIOLOGISTS have long insisted that religion is about far more than worshipping a deity or proclaiming ultimate truths. It is also a means of social bonding, sharing pain and sorrows, and experiencing ecstasy together. Do you need to believe in God to do any of that? Not at all, says Sanderson Jones, a stand-up comic and now a kind of preacher. In January he created a “Sunday Assembly”—a regular gathering for non-religious Londoners featuring storytelling, jokes and singing to a live band. Since then, its growth has been divine.

Mr Jones (who once worked as a salesman for The Economist) and his fellow comedian Pippa Evans held their first gathering at a deconsecrated church in Islington. As the congregation has grown, it has moved to the larger Conway Hall, home of the Ethical Society, an august non-religious institution. On October 20th Mr Jones and Ms Evans announced that they were setting off on a 40-day tour to other cities, including in America, where offshoot assemblies are coming together. They also hope to raise £500,000 ($810,000).

“We have gone from one congregation to about 30 within a year,” says Mr Jones, pointing out that this might make the Assembly the fastest-growing church in the world, at least in proportionate terms. A similar mix of grandiloquence and irony pervades his services. They feature familiar pop songs such as “Celebration” by Kool & The Gang, a funk group, and sermons that mix earnestness and silliness. At the end, people eat cakes. Members have set up a book club, a philosophy circle and a small self-help group.

Atheists have been gathering in pseudo-religious settings in London since the 19th century. But most meetings have been rather worthy and cerebral. The latest venture, by contrast, draws on techniques that have also been used to breathe life into traditional religions: a mixture of technology, warm collective emotions and charisma.

New churches often disintegrate acrimoniously once a charismatic leader withdraws or loses control, or once enough money flows in to be worth fighting over. Neither is yet a problem for the Sunday Assemblies. But they might be one day. Such are the trials and tribulations of non-prophet organisations.